Record low interest rates and a fear of missing out as house prices accelerate sharply are driving Australians to buy property in a booming market.

“We are seeing record high volumes of people searching for properties and our index of demand, which measures high-intent buyers, is also close to an historic high,” Mr Kusher said.

“We’re also seeing property prices rising throughout the country at a fairly rapid pace in many areas.

“I believe that FOMO is real at the moment and a strong driver of purchasing behaviour.”

Unprecedented buyer demand, record low interest rates and a low volume of stock for sale have pushed prices higher, with the REA Insights Home Price Index Report showing a 5.9% rise in dwelling prices over the past year.

A number of economists have forecast property prices will grow by 5-10% both this year and next, with some forecasting a sustained housing boom and 20% growth by the end of 2022.

“Although borrowing costs are likely to remain low for some time, for many buyers I sense a concern that the longer they wait to purchase the more expensive things are going to get,” Mr Kusher said.

“For buyers that have recently sold, the longer they are out of the market the more capital growth they continue to miss out on,” he added.

“In contrast, last time we conducted the research in 2019, Australians were prompted by life stage changes, such as starting a family, children flying the nest, or taking the plunge and moving in with a partner,” Ms Hodgson said.

Market influences had the biggest impact on buying considerations this time, nominated by 46% of survey respondents.

Life stage came in second (41%), followed by financial reasons (31%) such as salary changes or wealth creation. A lifestyle change was a factor for 27% of respondents, while 22% pointed to career reasons such as starting out, retiring or losing a job.

The main market factor was low interest rates, which were prompting one in four buyers to consider buying property.

The survey – an in-depth study of property consumers in Australia – showed government grants and schemes were particularly strong influences for first-home buyers.

Mr Kusher believed interest rates were an even stronger overall driver of the current levels of housing demand.

“Historically we have seen that as interest rates fall, demand for properties rise and that is playing out once more with borrowing costs now at the lowest levels on record,” he said.

While the Reserve Bank of Australia has ruled out an early rate rise before 2024, economists believe the Australian Prudential Regulation Authority will introduce macroprudential ‘speed limits’ later this year or next year if lending standards deteriorate.

COVID has led to a significant change in what people want in a home, including a shift in preferences towards houses and away from apartments.

“While Australian homes have always been large and had excess bedrooms, with more people working from home more often, what they want in a home has become even more imperative,” Mr Kusher said.

Ms Hodgson said three quarters of Australians made nominal changes to their home during COVID, while the survey also showed the pandemic had changed the features they viewed as most important in their homes.

For homebuyers in particular, COVID had made these features even more important.

When it came to the important property features buyers were less willing to compromise on, air conditioning, a garage, the number of bedrooms and natural light topped the list.

“Eight in 10 buyers highlighted sustainable features as either critical or important when looking for a property, with most willing to pay extra for the pleasure,” Ms Hodgson said.

As property prices rise, so too has the average amount buyers plan to spend on their next house. 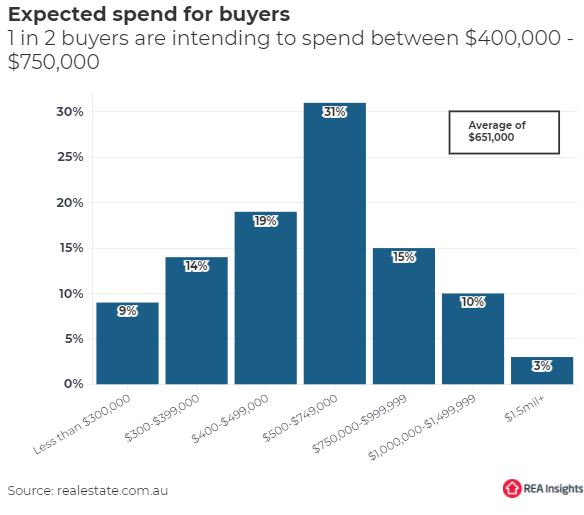 “Combined, that helped push the average amount buyers expected to spend to $650,000.

“In short, it’s safe to say buyer expectations have risen in line with property prices.”